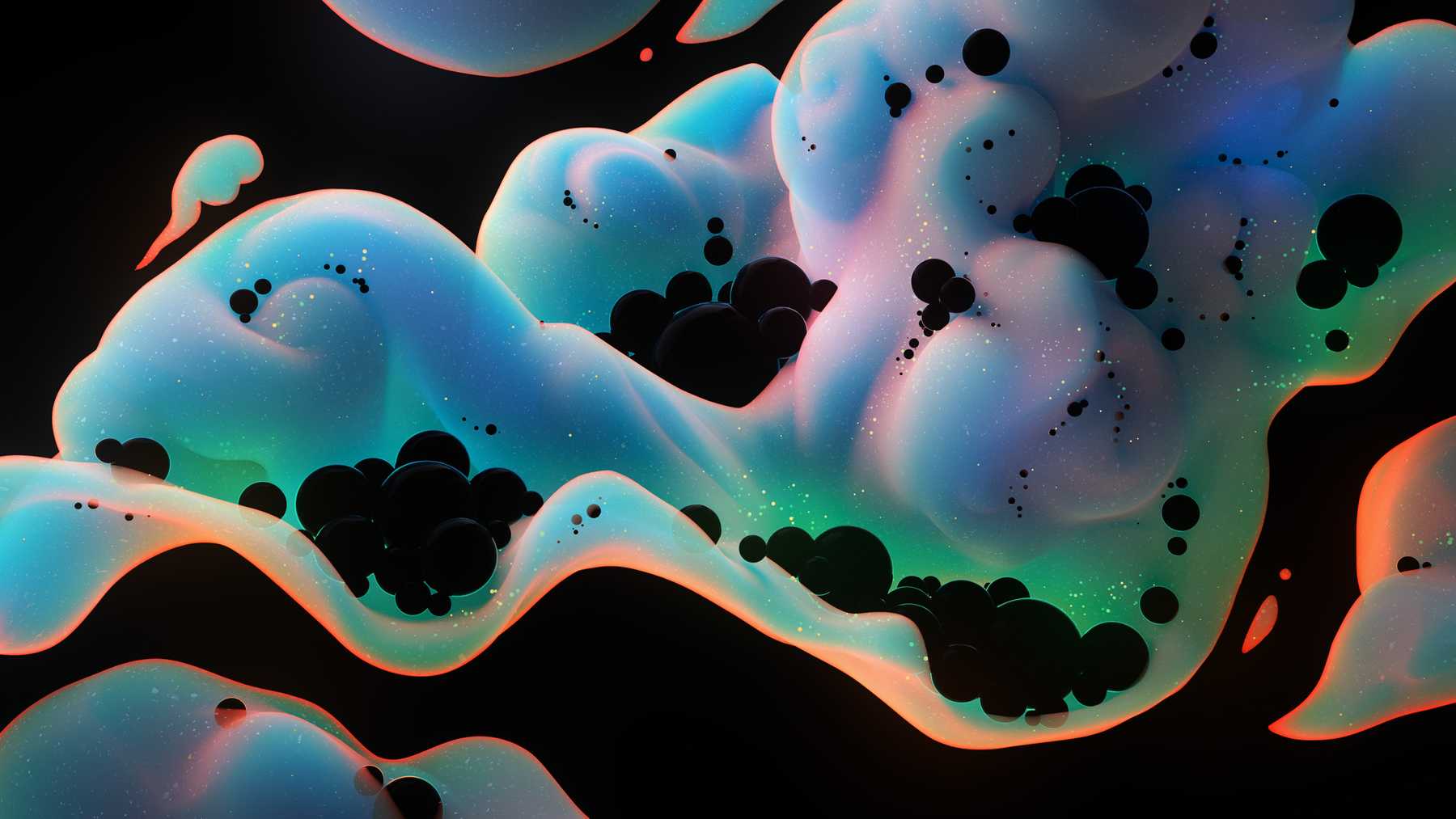 In 1995 René Peoc’h did an experiment (paper titled: “Psychokinetic Action of Young Chicks on the Path of An Illuminated Source”) to see if consciousness could influence a random number generator. He put baby chicks in a cage in a darkened room with a randomly moving robot outside with candle attached to it. When the chicks were not present the robot’s path was random, as expected. But when the chicks were present the robot spent more time near the chicks. The chicks seemed to be pulling the light-bearing robot toward them. 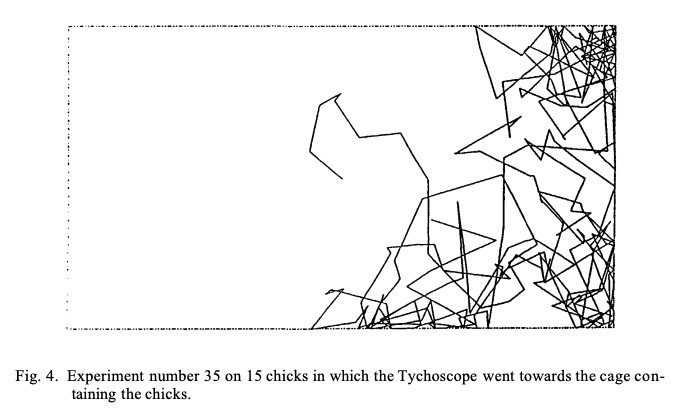 We tested the possible psychokinetic influence of 80 groups of 15 chicks on a randomly moving robot carrying a lighted candle in an otherwise darkened room. In 71% of the cases, the robot spent excessive time in the vicinity of the chicks. In the absence of the chicks, the robot followed random trajectories. The overall results were statistically significant at p < 0.01.

If consciousness does affect the physical world as the experiment suggests, how might that work? Does randomness provide a mechanism of action, or “attack vector”, through which the mind can exert influence?

If you were given a long string of random numbers and asked whether it was created by human or computer, how would you tell? You can tell by going through the sequence and counting how many times each possible pair occurs. You will end up with something like this:

Now plot the histogram. If it’s truly random (machine generated), it should be roughly flat, like the plot below. If the string is human-generated however, certain pairs will tend occur with conspicuously low frequency. These under-represented pairs are the doubles like 00 or 99, and the ascending/descending pairs like 23, 56 or 43, 89. We humans have the incorrect intuition that “non-random” looking pairs like these should not occur often in a random string.

But the intuition is wrong. sufficiently long strings of random digits produce all sorts of “patterns” like consecutive digits, ascending/descending digits, etc. 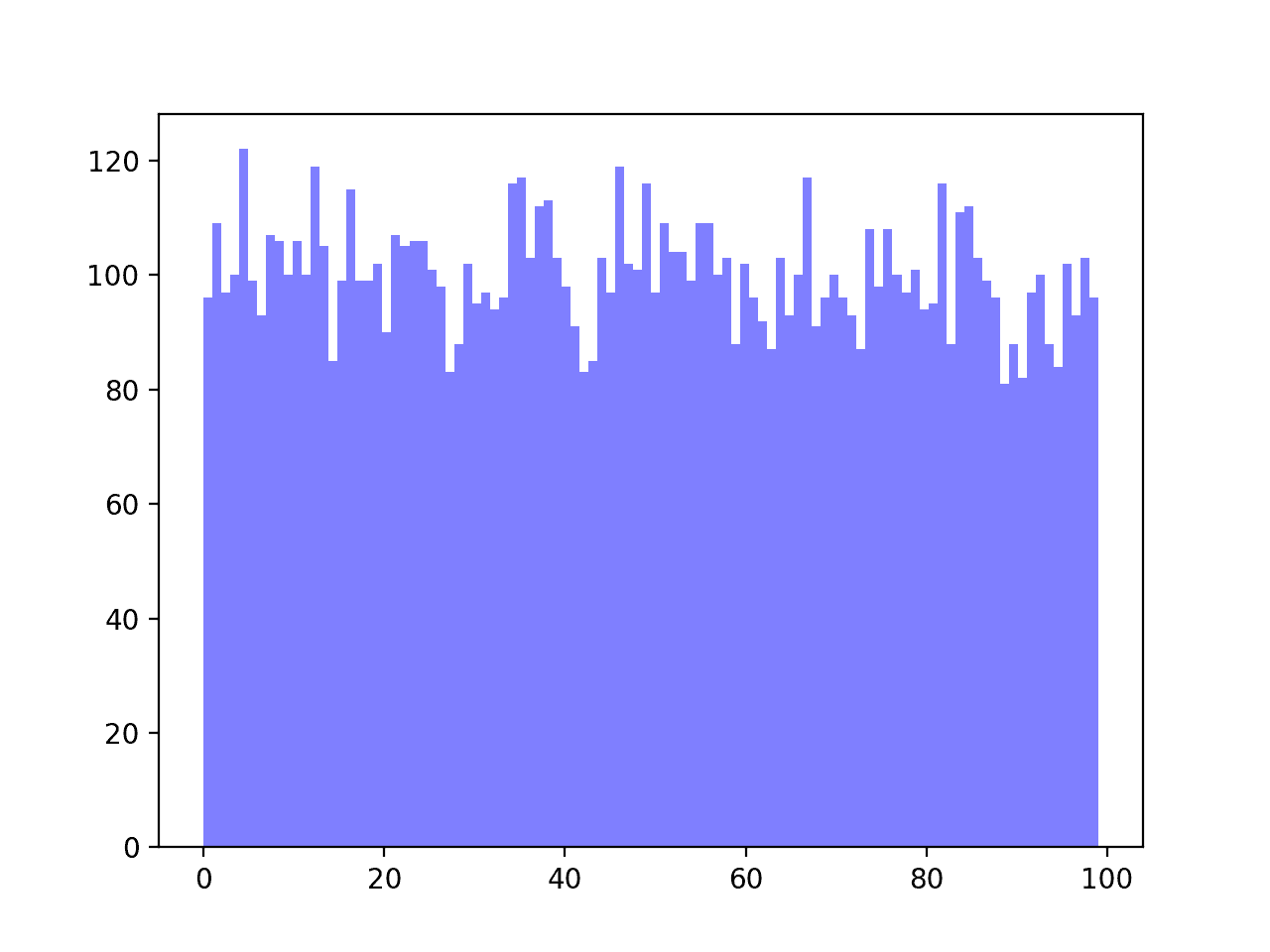 A semi-famous example of a “pattern” in randomness is Feynman’s Point in pi. Pi is an irrational and transcendental number, it never ends and never repeats. The distribution of digits in pi is effectively random. But, it turns out that 762 digits into pi there is a string of six consecutive 9s. It’s called Feynman’s Point because Richard Feynman used to joke (allegedly) that he wished to memorize pi up until that point so he could end his recitation with, “nine, nine, nine, nine, nine, nine, and so on…” as if to imply it was all 9’s from there on… 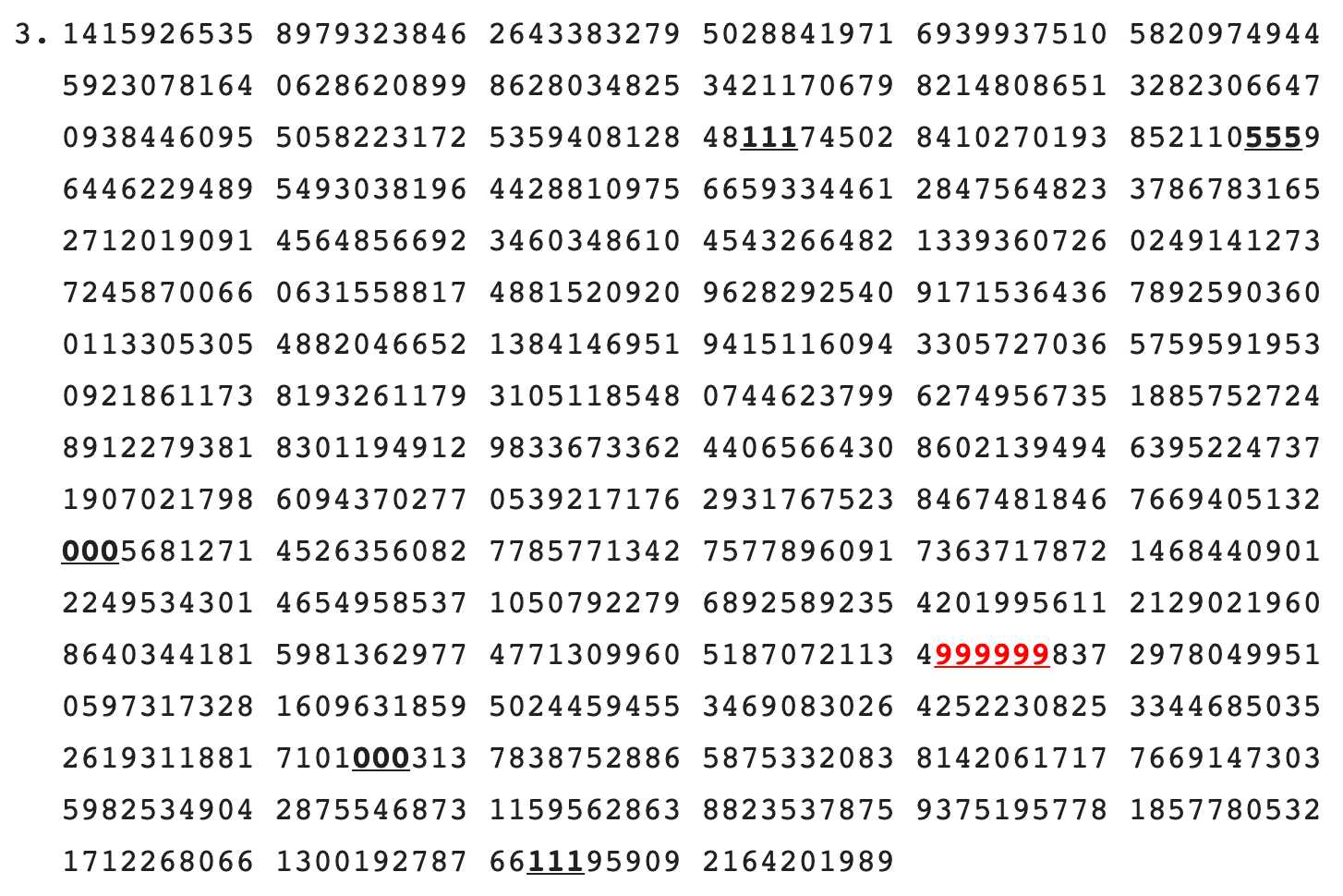 This is all to say, we don’t have very good intuition about randomness. Randomness can, and will, contain all sorts of apparent patterns. And so, given a large enough pool of randomness, like a very long string of digits, you can essentially put any pattern you want into it without breaking any “rules”.

The big surprise of 20th century physics, along with Einstein’s relativity, was quantum mechanics. We previously thought that the world was a mechanistic, deterministic clockwork like Newton described. But nature, as we understand it now, is fundamentally probabilistic.

This is Heisenberg’s uncertainty principle. It turns out that all matter is actually wave-like as well as particle-like. This puts fundamental limits on how accurately we can predict the future state — for example position and momentum — of a particle given its initial conditions. The more precisely you determine the position of a particle to be, the less precisely you will be able to determine its momentum. And this is not just an artifact of our measurement instruments, but the reality of reality.

Thus, the uncertainty principle actually states a fundamental property of quantum systems and is not a statement about the observational success of current technology.

So, as we try to get more and more accurate measurements and predictions at the base level of reality we hit this probabilistic wall. At bottom it just is uncertain. Particles do not have an exact position and momentum, rather these values are determined by probability density functions — by randomness. And this probabilistic nature is not limited to particle position/momentum, the timing of radioactive particle decay, for example, is similarly determined according to some probability distribution.

So, where does the randomness come from? Does it have a source? Is there some randomness-engine or randomness-oracle underlying our physics — or is it just inherent somehow? In computer programming we have randomness-engines in the form of code libraries and web APIs. These can be called on to get random numbers, strings, binary yes/no outcomes, etc.

If the mind were doing this — if it were affecting the randomness engine — that would not necessarily be breaking any “rules” of randomness either. As mentioned above, randomness can have “patterns” in it. A flipped coin can come up heads many times in a row. A measured electron can appear in the same region multiple times in a row. The rules set out by the equations which govern these events are not being violated unless the perturbations are so extreme and so common that the realized probability distributions no longer match the expected distributions set out by the equations. This can be fixed by making it “harder” to manipulate the randomness-engine into producing very unlikely outcomes, and easier for the more common outcomes.

In short, the outcomes of events would need to match what would be expected given the equations. This would not preclude the manifestation of unlikely events though. They would simply need to be appropriately rare. So, it would perhaps be possible to manipulate the randomness-engine to produce some extremely unlikely “miracle” event, but those would need to be very hard to produce, or having occurred, there would need to be some “cool-down” period before another could happen.

Interface to the Randomness Engine

An obvious problem with all this is that, supposing the mind could affect the randomness-engine, it would have no way of knowing which quantum events to nudge, and in which direction. If you would like to manifest a new career opportunity for example, which specific quantum events would you choose to influence? Maybe some neuronal firings in your employer’s head? OK, which neurons?

The only way this could work would be if the randomness-engine took “commands” in a format more accessible to the mind. Rather than the mind asking for micro events to unfold one way or another, it would present the desired macro outcome — perhaps in the form of an image — and the engine would adjust its randomness to achieve that outcome.

This is, of course, what proponents of the mind-influences-reality idea suggest — that manifestation works by visualization. Visualization is the interface to the randomness-engine.

It would also seem that time-delay and specificity should be factors. If some vision is broadcast to the randomness-engine which requires some very specific event to unfold in a specific way then there are perhaps fewer “paths” which could lead to that outcome. If your vision is that you will get some specific promotion at work, and that decision lies with one person, then the randomness-engine has to nudge that specific person’s thinking. On the other hand if the vision is simply to have some kind of career advancement, then that could come from many possible avenues, and the engine can nudge one of many people’s thinking.

Similarly, the more time that is allowed for the engine to work the better. If the deadline for a work promotion is tomorrow, and you haven’t yet even been considered, then it would take a very large perturbation of micro events to change the course of that promotion. If, on the other hand, it is six months away, the engine can put out some very subtle, periodic nudges which gently guide the decision makers to consider you.

If there is some kind of randomness-engine, and if it can interact with the human mind and perhaps other sources, then this may have implications beyond manifestation through visualization.

Maybe the apparent effectiveness of Tarot and other similar card-reading (if any effectiveness exists) is due to the randomness element at the center of these practices. The cards are shuffled and drawn at random. This provides a “door way”, or portal, for the randomness-engine to influence things. A relatively small nudge can push you to draw a specific card, one which has special significance.

Jung’s synchronicity may be another place where the randomness-engine does its work. Meaningful, but apparently unrelated, events and occurrences arise in a person’s life, maybe seeming to carry with them a message. These events are often small. Maybe you bump into a certain person at a certain time, or you notice a certain story in your news feed that otherwise would go unnoticed. These minor events could be made to happen, or not happen, fairly easily given a randomness-engine.

Finally, this concept would open the door to happenings as strange as miracles and “magic”. Few macro level events are actually prohibited by fundamental physics. Resurrection for example, especially shortly after death, may not need to break any laws of physics to occur — it may simply be a matter of many unlikely micro events all occurring together. “Miracles” like resurrection may simply be unlikely, rare — but not impossible. 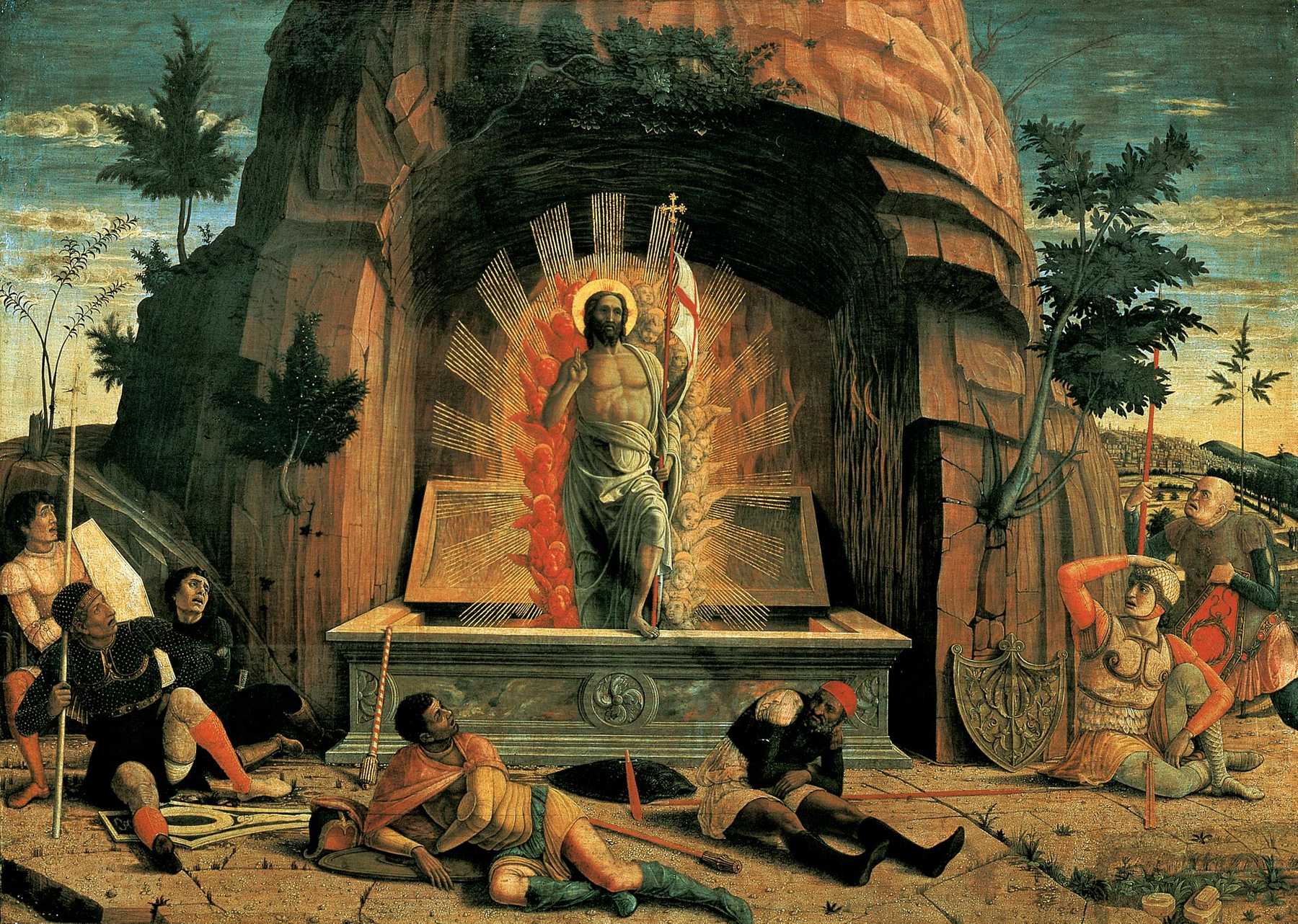